Welcome to this little piece of my world.

I make performances involving bodies. I work with movement, music, writing and improvisation. I dive into nature and invite you to join me.

I am looking for honesty, sharp sensations, full involvement and inner silence in myself and in others. I am looking for something true, sincere and vulnerable that connects us as living beings. I connect to my wild and sensitive self, to landscapes, to animal, vegetal, mineral, elemental,and imaginary beings,… 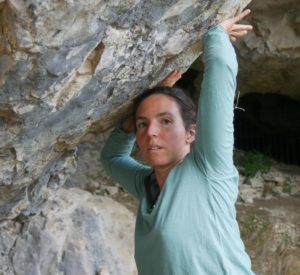 Lucile Belliveau is a performer and choreographer with a surprising background. Her interest in dance began in 2013 with couple dances (Brazilian Zouk and Tango) which she practiced in London, Munich and at international congresses across Europe. Her growing interest in the body led her to contemporary dance, classical dance and then to multiple other somatic and spiritual practices.

In 2015 and 2016, she did a year of professional dance training at Iwanson school for contemporary dance in Munich, Germany. This was an intense and technical training in jazz with Isabella Blum, ballet with Hanna O’Dwyer, modern and contemporary dance with Pia Fossdal, Ryan Mason and Cristina d’Alberto and improvisation and composition with artistic director Johannes Hartl. With the support of the school, she was able to perform in Gasteig in the choreographies of the teachers, and create her first two short pieces that marked her debut as an independent choreographer. She created the pieces “Slow” and “Qube” with the Iwanson students and commissioned Floriane Dardard to write the original music.

She expands her contemporary dance practice through numerous workshops with renowned artists such as Gaga and Repertoire workshops with Ohad Naharin and the dancers of the Batsheva company, and workshops with Sita Ostheimer (Hofesh Shechter), Stella Zannou, Jos Baker (Peeping Tom), Rakesh Sukesh, Evangelos Poulinas or Mehdi Farajpour (Orian Theatre). In 2016 and 2017, she was part of a movement experimentation and self-research group led by choreographer, dancer and former P.A.R.T.S teaching director Mia Lawrence. There she discovered the practice of yoga, meditation and full presence in dance. This culminated in in-situ performances during the DANCE festival in Munich in May 2017 that included structured improvisations worked with Richard Siegal, Bejamin Vanderwalle and Judith Ruiz-Sanchez among others.

Lucile is also interested in many other performing arts practices. She explores circus arts with workshops and classes in floor acrobatics, partner acrobatics and hand stand in Germany and France. She practiced theater at the Ecole Jacques Lecoq in Paris and in an amateur Spanish-speaking theater group Esquina Al Sur in Munich. Lucile has also been a musician since childhood. She studied piano and music theory at the conservatory from elementary to high school and then started independent and alternative projects on the double bass. She has played and arranged pieces from the traditional Iraqi repertoire in London, played blues and traditional Turkish music in Munich and is a member of European classical music amateur symphony orchestras, jazz bands and even a metal band.

In 2017, she undertook a multi-month trip to India where she practiced and taught contemporary dance and was introduced to kuchipudi, kalaripayattu and dhrupad. She received traditional teaching from the dancer, teacher and choreographer Vyjayanthi Kashi, a leading figure in kuchipudi, the classical dance of southern India. With her, Lucile learns to express ideas through codified movements and above all to dance from the heart by sharing a sincere joy with the audience. She practices the ancestral martial art of kalaripayattu with Ranjan Mullaratt in Bangalore and discovers this fluid and powerful movement. She practiced dhrupad, an ancestral Indian vocal music style with the illustrious Gundecha brothers. She found confirmation of her intuition about artistic practice as a meditation through their full presence in the moment and their absolute concentration on singing.

At the same time, she develops with the musician and composer Floriane Dardard the collective Catastroflux. Together they create the piece Absurd Journey where they link electronic and acoustic music, contemporary dance and multiple collaborations in a narrative where the absurd is resolved by harmony.

In 2018, Lucile returns to France where she continues her artistic activities. She performs with musical and danced improvisation groups. The collective Catastroflux becomes a professional association that develops its activity in the field of live performance. She co-organizes the festival “Frazz’art en scène” in the Perche to which she invites music groups from all horizons and for which she develops with Catastroflux a contemporary installation and in-situ ambulatory performance. In 2019-20 she will lead the group “Rue Vivante” where improvisers meet in a confined Paris to dance and play music together in the streets.

In 2021, Lucile moves to Drôme where she develops her artistic activities in nature. She begins a process of “re-wilding” by experimenting life outdoors and in ephemeral tribes. She transmits her passion for movement in the open air through guided workshops and nature dives. She explores different ways of inviting the public into nature, notably through hike-performances.

Finally, let’s mention Lucile’s scientific experience: she did a bachelor’s degree and a master’s degree in biology at the Ecole Normale Supérieure in Paris with internships in Japan, Vienna and Paris. She then did a PhD in computational neuroscience in collaboration between University College London and Ludwig-Maximilians-Universität in Munich, followed by a one-year post-doctoral fellowship in Munich. She graduated from her thesis in November 2017.